I’ve been called old-fashioned when it comes to communication. Some people don’t understand why I like email so much. (I love email. It’s the best. Please email me.)

One reason is that it’s the only good way to send messages which are clearly non-urgent, and can be easily tracked. Why is this important? I think it saves everyone a lot of time and attention, by removing unnecessary interruptions.

Communications can be segmented in various ways, one of which is by urgency. Most people would agree that there’s a relatively clear one-dimensional spectrum of message urgency, from “I found a cool cat picture” to “I’m outside your door” to “My house is on fire”. Broadly we could refer to these as low-urgency (whenever), medium-urgency (as soon as convenient), and high-urgency (right now).

A hundred years ago, when our choices of communication were limited, things were pretty straightforward. Low urgency? Send a letter. Medium urgency? A telegram might do. High urgency? Phone call.

Twenty years ago, things were similar. You might send a letter or email for a low-urgency message. Medium urgency could be a text, or a message through an IM platform such as MSN, AIM, or IRC. High urgency would be a phone call, ideally to someone’s mobile if they had one.

Now we’re in a world where a significant amount of communication goes through platforms like Facebook Messenger, WhatsApp, WeChat, Snapchat, and Instagram, where messages occupy an usually large portion of the urgency spectrum. While there are other reasons these platforms may not be ideal, I think there’s a high productivity cost associated with the lack of urgency segmentation in messages sent through these platforms. 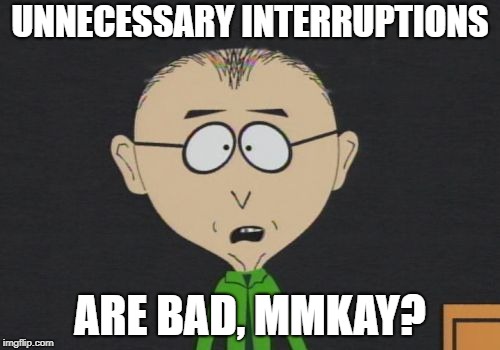 There might be benefits to multi-tasking in some situations, but generally it’s considered bad for productivity. Taking this idea further, the concept of Deep Work – long periods of uninterrupted focus – has become popular in recent years, and associated with success in challenging fields.

The interruption cost is worth paying in the case of an urgent message. But because of the lack of segmentation, a large number of non-urgent messages also incur this cost. The average WhatsApp user receives around 50 messages per day. How many of those are urgent to the extent of needing to be seen within a few minutes? Almost certainly no more than a handful. Yet for most people those will all trigger a sound or vibration alert, distracting them from what they’re doing at the time.

Tools for dealing with this are fairly limited. Some options:

Two things I’d really like to see (please let me know if you know of a way to do this!):

Equally, interruptions detract from experiences where productivity isn’t involved. Watching a film, going for a walk, or just having dinner with someone are all generally better without unnecessary notifications.

In certain areas productivity can be a final goal – such as at work. Now that IM (Skype, Slack, Bloomberg…) is a staple in the office, it’s a huge attention drain. I think in the vast majority of cases it probably does more harm than good, especially in a culture that overly values quick responses. Note that here, email is only a good solution if it’s used properly. As always, Cal Newport has some suggestions.